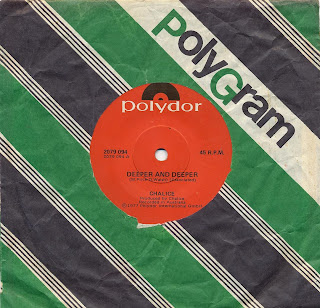 The final release by Chalice


I had a request to put this up so here it is.  I won't go into much details about it as there is a Anthology CD coming out soon and the whole history of the band will be included in the booklet.  I will however mention that the guys were originally from Manchester U.K. and migrated here back in 1973/74. They were quickly signed up to Clarion records and release a number of singles.  Later they signed to Polydor and released an album that was produced by Jon English.  A number of singles where lifted from the album with only one really charting.  The single here was to be their last in 1977 and was not on the LP, A last hurrah I guess.  Written by American songwriting duo Michael Price and Dan Walsh who wrote many hits for The Grass Roots, the best being "Temptation Eyes".  Why the record company insisted on having Chalice release other peoples songs as singles when the band clearly had great songs themselves is a mystery.  Take a listen and enjoy the great harmonies of Chalice.

Mister G
Perth, WA, Australia
Sharing some cool and sometimes rare music from the Western side of Australia. Some interesting and great tunes to be found here. If you are the copyright owner of the material posted here and you don't want it here then just ask and it will be pull down. The music here is to express the wealth of what this big state has to offer. I am not making any money from these posts just merely sharing some knowledge and memories. thanks.